Flutter vs React Native: What are the differences?

Digital transformation is ever-evolving and it's being more and more adopted by industries. The development of mobile applications is a fundamental pillar of this progress. The creation of a mobile tool, such as an application, contributes to the growth of companies by providing them with a crucial technological innovation.

Mobile development on multiple platforms, such as Android, iOS, and web normally requires several developers. However, a cross-platform language aims to code only once to create an app, which minimizes the need for multiple developers.

As a result, companies have adopted the solution to create cross-platform applications using a single programming language.

Discover and learn about two of the most popular solutions, React Native vs Flutter

React Native and Flutter are two frameworks that are among the best cross-platform developments of mobile applications for iOS and Android. The mobile development known as native, allows the exploitation of the same coding base per system, on iOS and Android, which we aim to deploy in an application.

The fact that you only have to develop once, makes it possible to create a compilation of applications called cross-platform.

React Native and Flutter are two flagship technologies, let's take a closer look at how they compare

React Native is still the most popular among developers around the world, due to the popularity of React on the web. It's a library in JavaScript programming language, which was developed and used by Facebook in 2015 to create its web applications. Today, this language has been evolved into React Native, a framework suitable for creating native cross-platform mobile applications using JavaScript.

Providing simple and cross-platform functionality. It's a framework that reduces development time in half due to the use of a single language adapted for iOS, Android, and the web. It's by far the fastest and most mature development framework for creating powerful and responsive graphical interfaces while giving mobile apps a native look.

React Native's popularity and efficiency are two of its biggest strengths. It links JavaScript code with native components without using the web browser and offers a hybrid approach: quick development and native UX. It's a technology that is revolutionizing mobile development.

Overall, to work with this framework, you have to learn Reactjs based on JavaScript which is easily used by web developers.

💡 Do you find this interesting and would you like to know more? Then take a look at this blog 👉 How we used React, Gatsby, and Prismic to create a high-end and well-polished website

Given its growing popularity, Flutter is the latest open-source framework to be aware of. It's a programming language developed by Google in 2018 that allows you to create native cross-platform apps for Android, iOS, desktop, and web, using a single native codebase for each operating system. This framework offers a library of user interface (UI) elements as well as performance that is comparable to that of native apps.
Flutter does not use native components, instead, it uses its own components, known as "widgets", this makes it easier to customize the application to appear the same on different platforms.

The unique development of a project suitable for all platforms, which reduces production time and costs, is Flutter's main strength.

The SDK (Software Development Kit) used for Flutter is based on Dart, which was developed by Google as well. The principle of Dart is the same as JavaScript, it contains a set of software tools simplifying cross-platform development.

There are two very different approaches to developing mobile applications:

Each approach has its advantages and disadvantages, depending on the project, one or the other may be more beneficial.

React native uses all the components provided by the JavaScript library for mobile development. The framework also uses a virtual DOM which is a programming concept used to represent native user interface (UI) elements.

React Native provides, among other things, a significant amount of components. They are regarded as components that adapt to and evaluate the platform on which they are designed in order to achieve the desired outcome.
When developing a mobile app in React Native, all of the code is the same for both Android and iOS versions. The business logic and layout are only done once.

Both React Native and Flutter offer "Hot Reload", a tool that allows you to reload code in a mobile app without having to refresh it in order to get a real-time result.
Components in a running app update instantly thanks to "Just In Time" compilation, making it easier to detect improvements without having to restart or rebuild the app.

Flutter uses widgets for the user interface, which are built by the graphical engine written in C++, rather than native components or web views.
The Dart language offers a compilation mode for unparalleled development.

AOT - Ahead Of Time - is a mode of operation used to generate a native application for each mobile operating system. This not only allows for code optimization for development architecture but also allows for the application's size to be reduced, resulting in improved performance.

Flutter is more than just a framework; it's also an SDK that can run on any device with a screen.
As seen before, only one codebase is needed to develop an application deployed for each iOS, Android, and desktop platform (MacOS, Windows) with the same language.

There are many areas of optimization that allow React Native to increase its performance.
With the inclusion of native code in some parts during development, the application's performance was improved. This is how the Facebook application was built.

To build native applications with native performance, native languages such as Java, Swift, or Objective-C are used:

Prettier and ESLint are tools in React JS that help you write clean error-free code. You can also use TypeScript to develop with React Native. The entire application is not written in a native language, JavaScript runs in a separate process and interacts with native performance through a bridge, on the other hand, the UI components are compiled into their native counterparts. This allows React Native to be much faster and more efficient.

For a fluid app realization, Flutter avoids passing by JavaScript bridge, everything is managed by the framework itself.

Flutter uses the advantages of native applications to develop a more optimal app with a quality end result. It allows a loading time of less than a second, which makes its performance on platforms, iOS, and Android, ideal for users.

Since every element of the platform is a widget, developing an application is simplified. It's a framework that doesn't rely on platform-specific UI components; instead, it uses a collection of components, Material Design for Android and Cupertino for iOS, with the reverse working perfectly.

In addition, the Skia software enables Flutter to provide a library of 2D graphic images, which renders the user interface widgets included in the framework.

There are two basic models that allow the construction of native React applications: Flux et Redux.

Flux was implemented by the framework's developers, Facebook, while Redux is the most popular development model in the community. It's a library that offers a great development experience, it allows you to manage the storage of the state of the application in a "Store" and also the one-way data flow.

For the moment, hundreds of applications have been successfully developed using the React Native Framework. Here are some of them: 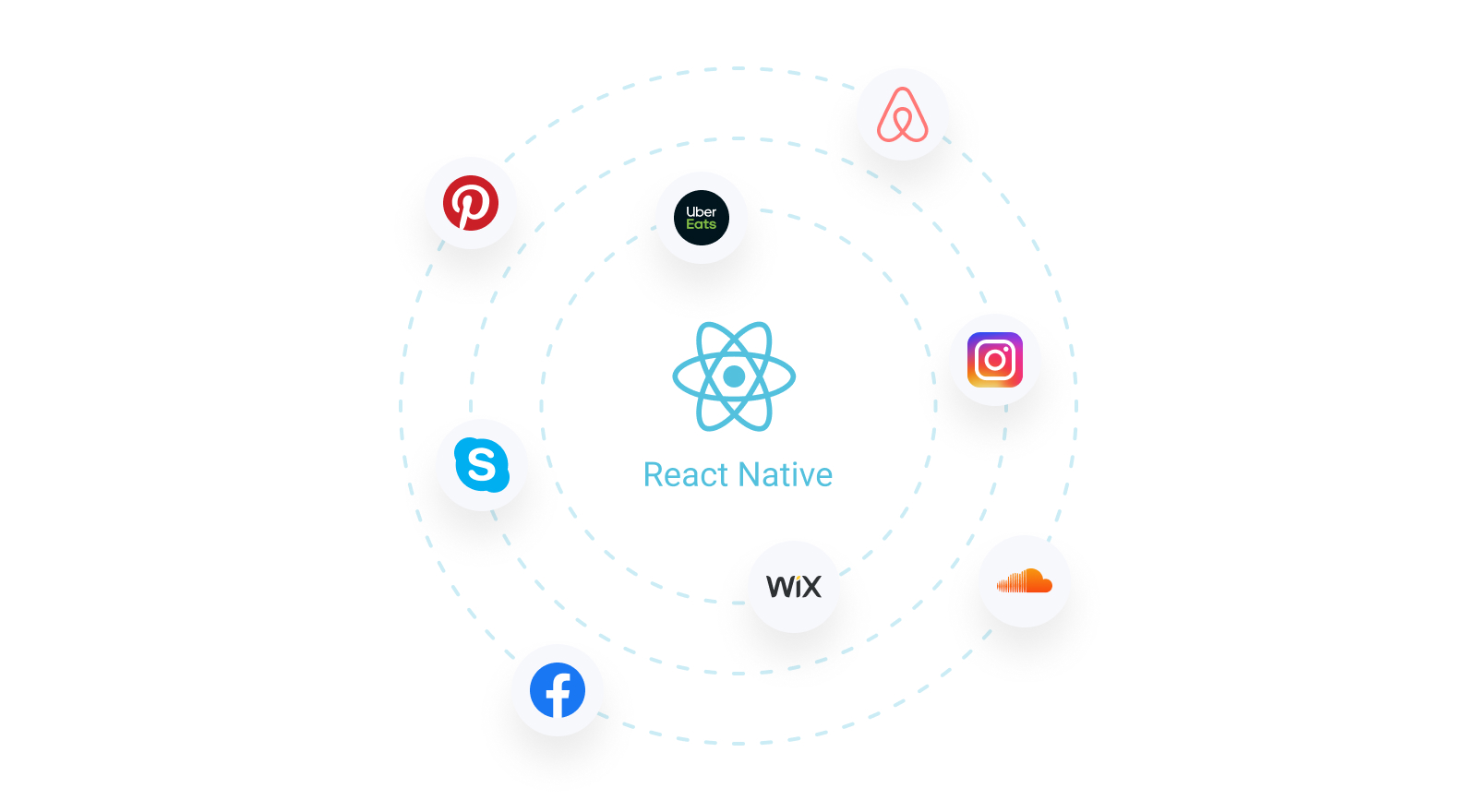 Flutter is divided into three different layers that allow building native applications with its components: Framework, engine, and shell.

The top layer is the framework written in Dart, this language includes the user interface elements as well as the libraries for creating widgets, animation, and colors. We will find in this category, Material, and Cupertino.

The engine is the Dart virtual machine which allows the development of the code as well as access to the Skia library to obtain the 2D vectorial images.

The shell will allow the specific implementation of the code for each system (iOS, Android, MacOS, Windows) and to host the engine.

For Flutter, we find the following companies: 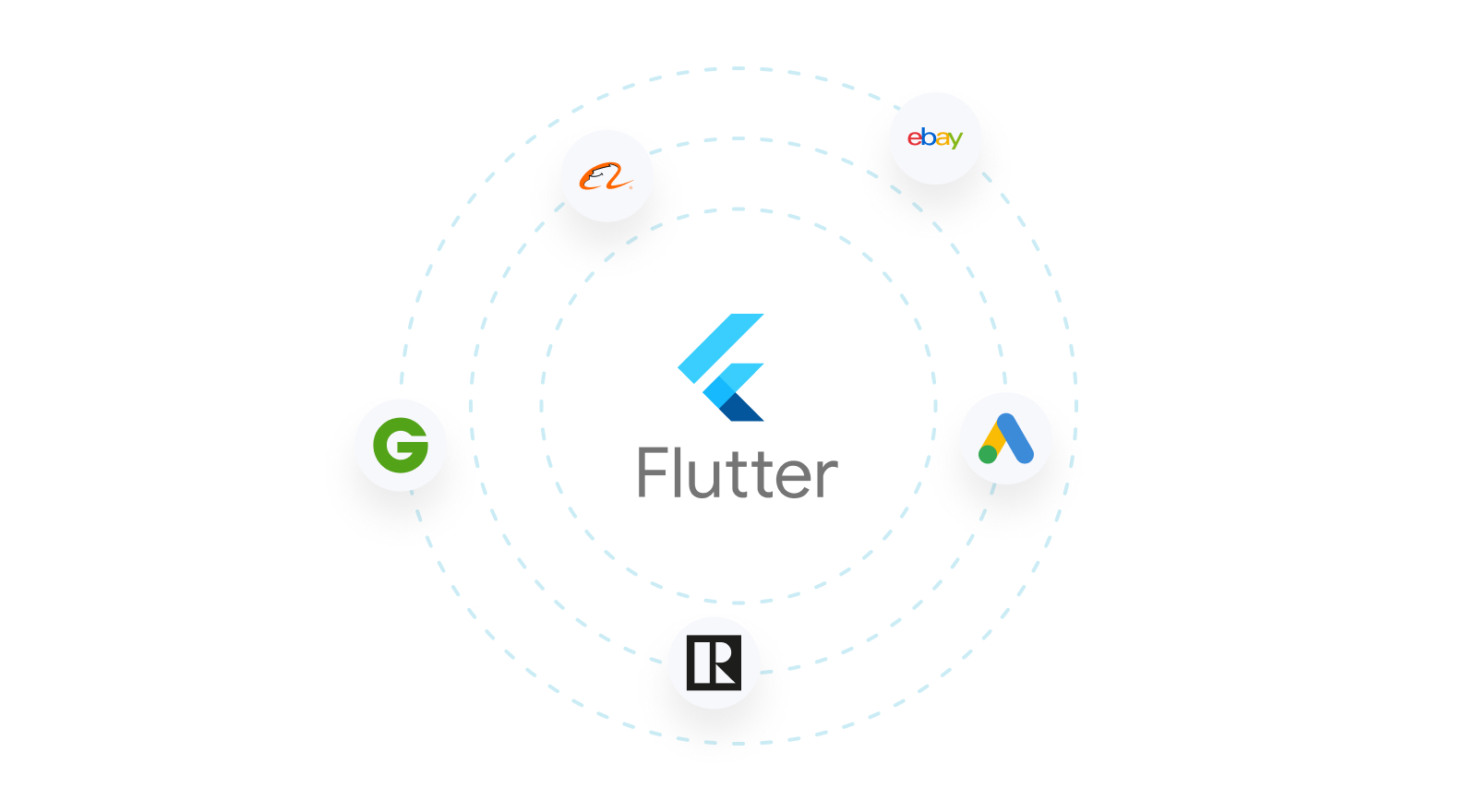 These two frameworks allow you to manage and develop mobile or web application projects with ease, using only one code for all platforms.

However, the choice of the framework will depend on the goal you have for your project, there is no better one to use.

Don't hesitate to look at our other blog posts!