In the past few years, a new trend has been increasingly present in more than one sphere of the programming world, but more specifically in desktop and mobile applications. It was the birth of cross-platform development and with it came a set of tools to help software engineers create programs and applications faster than ever. An impressive number of major players in the industry have also been making the switch, both Facebook and Google have been developing, maintaining, and using open-source cross-platform tools. Today, we're here to talk about how this new way of thinking can drastically improve the satisfaction of your clients towards your products in various ways.

What exactly does cross-platform mean?

"Cross-platform" is a term used to refer to any program or application capable of being executed on more than one computing platform with a single code base. An example of this could be a game built to support Android, iOS, or even Linux. Such projects often require a specific toolset to help programmers in their cross-platform journey in addition to all the usual stuff, such as:

You might be asking yourself, what do they have in common? That's a fair question to have at this point, so I'll answer it for you; All of the tools listed above aim to provide you with a single API on top of the platform-specific implementation to save you from dealing with all the differences between them. This approach is incredibly powerful as it allows almost anyone with basic programming knowledge to write applications that can run on as many platforms as supported by their tool of choice. 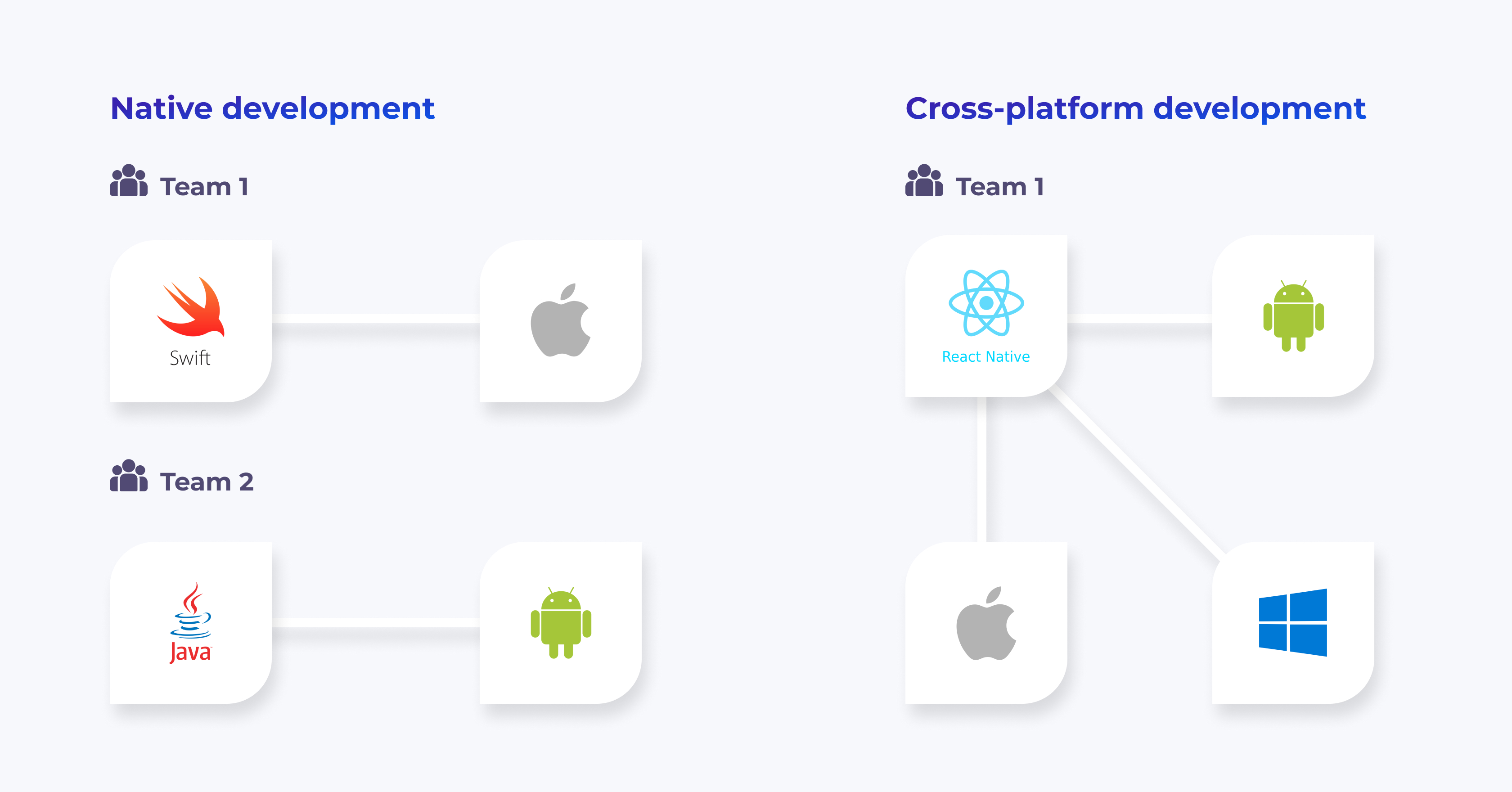 How does it compare to native development?

There are three types of development, native, hybrid, and cross-platform. Native development usually involves having different teams for each platform you need to support since each of them has its own language and environment. As you can probably guess, there are a few downsides to this more "traditional" approach to development.

First things first, having multiple teams will inherently require every feature or fix to be implemented separately by each of them. In a world where communication is perfect, that would not be a problem at all but in reality, this can lead to subtle differences in the user interface (UI) and business logic between platforms. This can then lead to incoherent branding and hard to track bugs, to help the situation you'd need to have a strongly established quality assurance (QA) process and efficient testing in place. Note that this piece of advice applies to all projects but is often overlooked by smaller companies because of a lack of budget and/or time.

Another pain point of native development is the fact that a single feature may take a different amount of time to complete depending on the platform. Let's say you would like to migrate your Android and iOS apps to use Material Design, a UI pattern invented by Google. This task would be quite a lot easier to achieve for your Android team as most of the built-in UI components are already compliant with the Material Design spec whereas your iOS team would need to spend a lot more time on customization and research. This means that the deadline that will be given to your client will be entirely dependent on the iOS side of things. Cross-platform development aims to solve exactly this kind of difference between ecosystems by allowing developers to only write one application that will work and look the same on all platforms. Of course, you can still choose to implement things differently per platform, if needed.

What about hybrid applications?

Another great question, I'll start by explaining how they differ from the other types of apps we've discussed so far. To truly understand the differences, we first need to define what "hybrid" actually means. A hybrid application usually starts out as a plain old website, which is then run inside a mobile and/or desktop container via "WebView".

This solution can be a very time and cost-efficient approach for businesses with an already established, mobile-friendly website, as tools like Cordova will allow them to release a version of their website to be installed directly on their users' devices very quickly. I addition to this, applications built this way have access to most of the native device APIs, this can range from retrieving geolocation to taking photos and reading messages.

To summarize hybrid apps are written just like any other website or web app, meaning one can use any language or framework supported by modern browsers but also have access to additional features similar to native apps, hence the name. This is an incredible way for a team of web-focused developers to leap into the mobile world without any prior experience. However, like any other technology, it is not perfect.

As I said previously, hybrid apps are run inside of a "WebView" which is essentially a web browser that is embedded inside the app. Let's take the basic example of navigation in a native application, be it Android or iOS. Both platforms have different animations and gestures which can be used to move around through an app, right? Hybrid apps will not have any of those and will behave and look like a website, meaning there will be no transitions or gestures between pages. This can be a deal-breaker for some as it may feel odd and uninviting to the end-users who are very used to all these mechanisms.


How can hybrid and cross-platform development benefit both my company and my clients?

Most of the advantages that cross-platform development can provide will not only benefit your company but also your employees and clients. It will allow you and your team to have only one code base to focus on, which means less manpower and time spent per project. Clients will love this as it will help reduce costs and turnaround time for feature requests or bug fixes up to fifty percent.

The main point to be made for cross-platform development is the vastly superior developer experience it can bring. Most tools now offer a mechanism called "hot reload" which lets you see changes on screen as you write them. This is not possible with native applications as all the code needs to be recompiled, bundled, and installed on every change. This can be very time consuming, especially on low-end computers on which this whole process could take anywhere between two and five minutes.

Another often overlooked aspect of cross-platform mobile apps is the ability to release over the air updates instantly, without going through the tedious review process of both Apple and Google Play which can sometimes take up to a full week. With services such as App Center by Microsoft, you'll be able to host the shared application code online and update it as needed (only when native code is not involved), and push it to your users in a matter of minutes.

Which approach is best for my business?

Here's how I would summarize the above points to help you make the decision that will most positively impact your company:

There you have it, I hope I've been able to answer most, if not all, of your questions. If by any chance this article sparked any sort of idea for you, feel free to send us an email at hello@nightborn.be, we'd love to have a chat with you!

Want to know what our services are all about?
👉 https://nightborn.be/services 👈

You can find more information on the tools and frameworks mentioned in this article by visiting the links below.